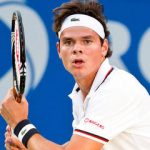 Private Eye has a column which libelously confuses two things, at least one of which is often a human being. It is enormously tempting, isn’t it, when one thing puts one so in mind of another.

When occupied on his purpose he appears to demolish all before him with a mixture of robotic concentration and merciless glee. It is a fearful spectre that chills the heart.

And yet here we are with a Men’s Final in SW19 where this year’s victor demonstrates an unendingly graceful, infinitely civilized style. Federer’s reputation for fair play akin to Borg’s, his focus on victory as McEnroe’s, his low-key stardom as Fred Perry’s. Perhaps it’s the case that a longer life in a chosen field supervenes on something more than skill of making mincemeat of competitors; it is a generosity of spirit ventilates those intangibles of humanity that extends lethal efficiency.