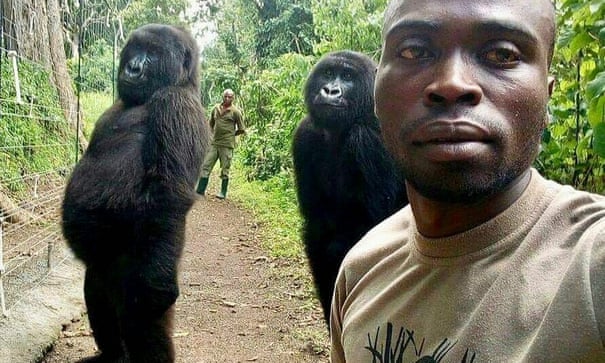 The longer I gaze at this image, taken in April by their keeper, Mathieu Shamavu at Virunga National Park in the DRC, the more I tremble inside.

These pages are forever banging on about the dignity of animals, their intelligence, their de anima: but this?

(Aristotle’s work Of the Soul (de anima) pertains to biopsychology, thus seems irresistible to acknowledge that Animal psychology is a thing.)

What is going on here? Are these adolescent females mimicking him; or stretching: or thinking ‘what the hell is he doing with that box?’; or saying to each other ‘Ooh, pucker up: a Selfie’. Whatever it is, there is thought behind it.

Mebbie by virtue of language, sentience – the capacity to reason – has been linked to sensory perception – taste, touch, smell and so on. Amid the scientific community, it is seemingly presumed that if unable to speak the Queen’s English (or all other national equivalents) an animal lacks the neurological network that transports signals of pain to the brain. This appears to justify inflicting annihilating misery on creatures with impunity. (Best not get me started on that one.)

So what are we saying here? Do you know, I’m not entirely sure. What seems important to highlight is that humans are one species of creature, gorillas another. The characteristics, biochemistry and physicality we share are largely self-evident. If two species of living creatures share functions essential to sustaining life, it’s not an extrapolation too far to posit all living creatures possess such corporeal operation. Pain is not a function of reason but a consequence of neurological pathways. If you step on a cats foot, the scratches up your leg will tell you it felt it. So, if we’ve the developed intellect to be kinder to all animals, why aren’t we?

Twelve year olds, of whatever species, appear happy to copy grown-ups. What else might we learn were they enabled to observe & experiment? Call it gorilla tactics.