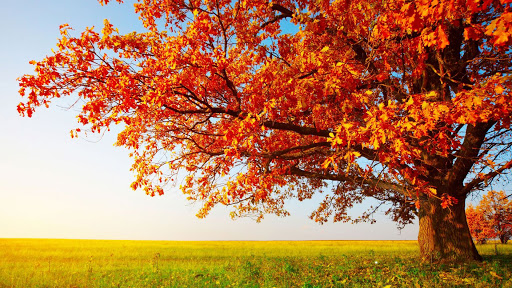 The Autumn equinox has inclinations towards breath-taking glory in colour, quality of air and the Light which infuses both.

We’ve so much over which to be glum currently that being thankful for Indian Summery weather is as being released from confinement don’t you think? Mebbie you don’t: but here at the Materials we do.

When early mist drifts dreamily before one’s eyes, there comes a reminder of how all, constantly, is in motion. The Earth’s tilt, eternally consistent, is remarkable in the grand scheme of things. We’re all 93 million miles from our star and for our little globe, a mere 24,000 miles in circumference, the modest shift might appear too meagre to impact across so heavily empty a void.

Not a bit of it. Existential core alteration of lifestyle for Northern and Southern hemispheres demonstrates an infinitely fragile sensitivity to fluctuation of any kind.

Quivering with gleeful anticipation seems a better option than sagging into sloughs of despondent gloom (which would appear, prima facie, a coherently rational response to that by which we’re besieged).

Joy begets joy … each thing gives birth to itself, afterall … by virtue of which the self-fulfilling prophesy of receiving what we give might carry us through these coming, uncertain months, resilience intact?