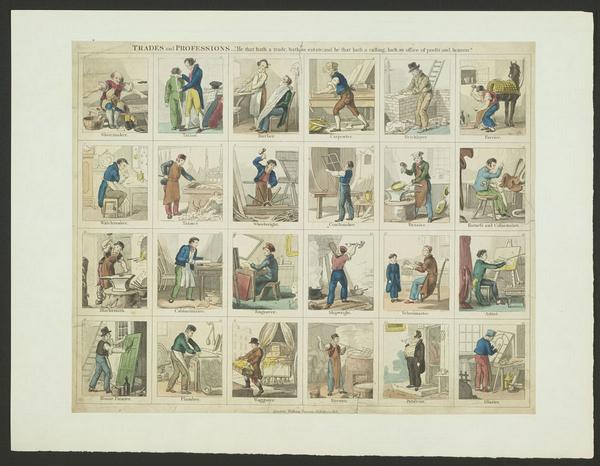 Tradesmen (9) by John Johnson in the ownership of the Bodleian

There are times when all one craves is a supercilious footman to peer down his nose and instruct the person at the door “Tradesmen round the back”.

As the country braces itself to rise in full height to dignify higher ideals of the #special relationship, it is possible to lose focus on its transitory players. Thus, we reflect on the curious mirroring of throwing toys from the pram which the peoples are doing inspired by the jejune reactions of their elected [and candidate] leaders.

The United Kingdom is not alone being in turmoil. Turns out it appears to be a function of the Millenium. If we look at neighbours near and far, none seems immune from expressing national displeasure. Seems that in leaving the Twentieth century behind, an appetite developed for refreshed engagement between rulers and ruled: the peasants have revolted and contrary to 1381’s precedent, are unlikely to re-submit to serfdom.

All of us are at the service of something beyond us in one way or another, whether the demons who drive gamblers, the merchants who drive trade, the oligarchs who swell their coffers, the families we wish to cherish and protect. What seems to have shifted and opened a space for dialogue is the acceptance that absolute power is an indication of the absolute corrupt-ness of its holder. And with that acceptance, it is discounted.

With the #Resident’s arrival through the Palace’s gilded front door° moments before the seventy fifth anniversary of D-Day’s Normandy beaches landings, perhaps there’s a chance to take a breath, listen to echos of the sacrifice others have made on our behalf and extend empathy for all those trapped in cycles of hellish atrophy.

° Just learnt the #Residential party will land in the Palace back garden.